The next generation of construction equipment is here. Cooper Gray Robotics has made a breakthrough with our Remote Operated Electric Bucket Loader (ROEBL). 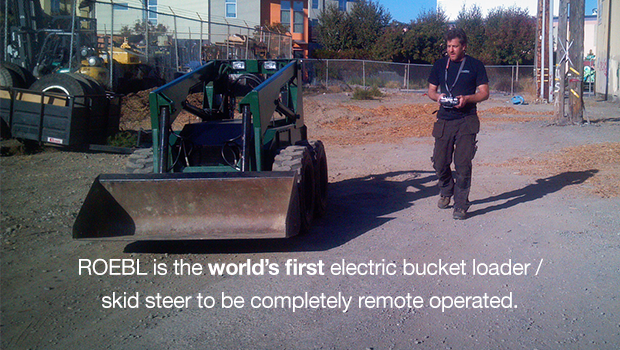 Think: a small tractor, or a Bobcat as most people know it by, completely driverless and controllable from anywhere in the world.

With proprietary, patent pending technology and a working prototype of the ROEBL Mark 1, we are primed to turn the construction industry on its head. Cooper Gray Robotics enters an expanding $3 billion global marketplace with a wide range of designs and applications for future robotic and electronic equipment for the construction market.

At CGR, we solve basic, but hugely important issues: Construction is dangerous with humans lives often at risk, our reliance on fossil fuels has to decrease, and everyone is trying to cut overhead costs. The obvious solution: make equipment remote controlled and electric.

Our first product, a skid steer called the ROEBL Mark 1, can operate in a wide range of applications that diesel powered machines cannot, including hazardous and dangerous sites, indoor garages, ship holds, steep grades for road construction, firefighting lines, etc. This is because the driver is not on the vehicle and there are no toxic emissions. 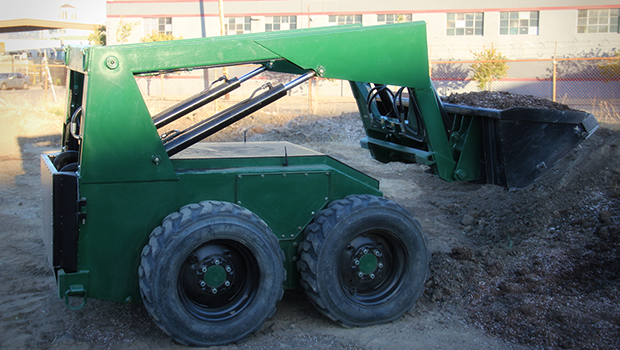 We are the first company to create a remote controlled electric construction vehicle (soon to be GPS controlled) that can handle dozens of jobs. All skid steers have more than 100 attachments including ploughs, forklift blades, post hole diggers, jackhammers, etc. that make it a versatile do-all vehicle for farms, construction companies, and a number of other industries.

Our technology increases the versatility of an already versatile machine. Our core invention, a sophisticated circuit controller, can work with any size electric powered construction machine and will have many applications in the future. 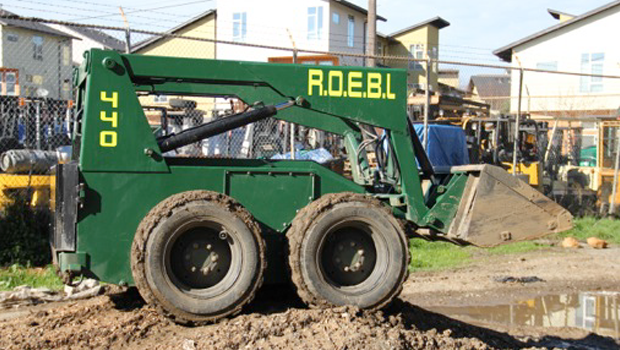 ROEBL has no tail pipe exhaust, allowing operation inside buildings, mines, garages and other conﬁned spaces.

ROEBL has no operator on board, permitting operation in hazardous work sites while reducing workman’s comp claims and accident risk.

ROEBL has telepresence — i.e. it can operate from anywhere in the world.

ROEBL has a superior center of gravity and can ascend a steeper grade without tipping or over-extending operation range.

ROEBL has no engine maintenance. ROEBL will work every time, in any kind of environment.

ROEBL doesn’t use oxygen in a closed space.

ROEBL is IP 67 spray down grade: Electronically sealed, no sparks, & safe in an explosive environment.

ROEBL can get its electric charge from renewable sources, grid and combustion fuel generators

Who Could Benefit From a ROEBL?

There are many applications for ROEBLs. To name a couple:

An organic vineyard needing a plough, forklift, tractor, etc. that does not want to spray diesel emissions on its fields and crops.

Or a major grain shipper that sends skid steers into the holds of its ships where the air is filled with toxic fumes and does not want to risk the health of the operator.

ROEBLs will completely eliminate the need for traditional diesel skid steers across all industries. 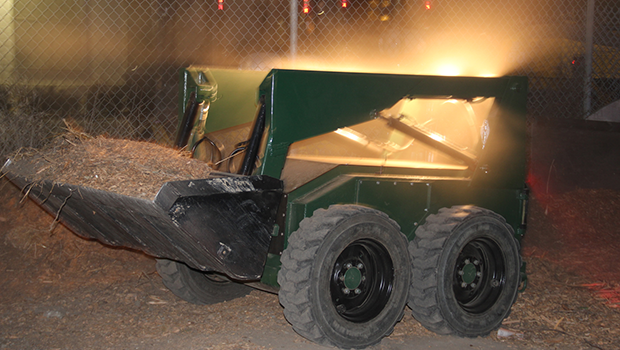 The applications of our circuit controller extend far beyond the ROEBL Mark 1. With all CGR innovations, we maintain a set of core brand identities:

Green: the Tesla of the construction equipment industry.

Versatile: able to work in the toughest environments including HAZMAT and security with a broad range of attachments.

Dependable: stands up to the toughest of job sites.

Electric: fuel can be obtained from all sources of electrical generation.

After developing the ROEBL over 5 years, we completed the prototype in June 2014. The short version of the year plus since: people have been reaching out like crazy asking to buy one, we have customers lined up and ready to go, and we have interest from a Chinese manufacturer — we just need funding to start the production process.

We will soon be the only available remote controlled electric driven construction equipment. CGR’s Intellectual Property:

CGR has ﬁled a patent application for our proprietary circuit board control technology.

CGR’s technology will work in a wide range of construction equipment platforms.

The current circuit conﬁguration can be directed by remote radio control or programmed to be fully robotic based on GPS.

We have also attracted media attention from major trade shows and the Maker’s Fair. CGR attended World Ag Expo 2015 where we introduced the ROEBL to the world. 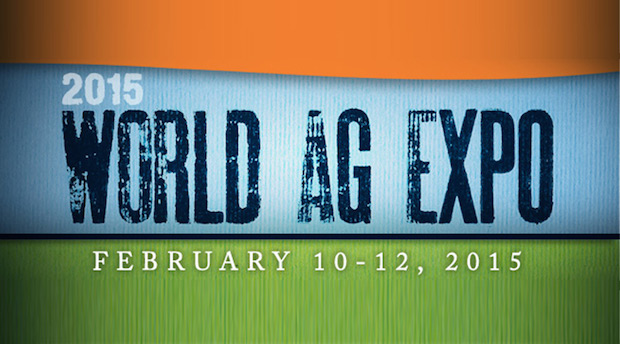 After seeing your electric skid steer, I became very interested in the development. Our company imports and exports agricultural commodities at our port facility in Stockton, CA. The potential for the use of this skid steer loader in vessel hulls at the cleanup stage of unloading is valuable. Not having to put an operator down in the hull with the dust from the commodity being handled and the emissions from a diesel engine would solve two personal safety challenges for our industry.

Up next: use our funding to build the next generation of production vehicles and market to our growing list of interested customers. Please request access to the Business Plan tab of this profile for full funding details.

We also need to continue spreading the word about CGR. We will launch a major PR campaign based on the novelty and value of our product, attend more trade shows, and reach out to our existing customer base.

We will market directly to organic farms and winemakers, major utilities, and construction rental companies who have expressed interest. We have extensive media contacts in the DIY and robotic press.

Cooper Gray was founded by Paul Cooper and Justin Gray. 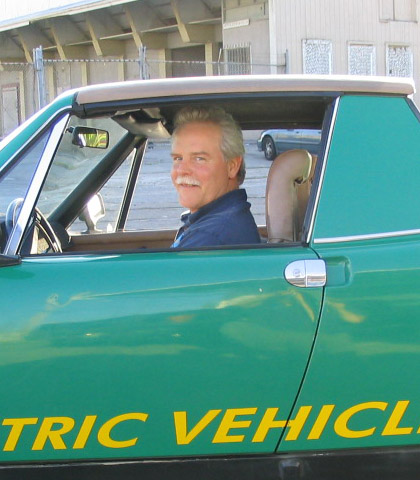 Paul Cooper, CEO
A pioneer in the electric car industry, Paul is also a long time green entrepreneur in residential solar, and a successful owner and operator of a small construction business. He is the former president of the East Bay Chapter of the Electric Automobile Association. Paul is the President and co-owner of an Oakland construction company. 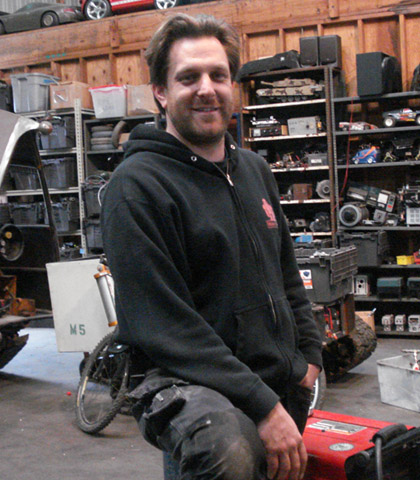 Justin Gray, CTO
Justin Gray is one of the pioneers in the robotic vehicle industry and a skilled metal craftsman and artist. An inventor and engineer with twenty years experience designing robots and other high-tech machines, he has been featured in publication like the New York Times, Wired, Popular Mechanics, and Popular Science. His show Machine Men will debut on the Discovery Science channel in 2016.

Issac Cronin, Marketing
Isaac is a marketing and business consultant who has worked with several electric vehicle companies in various stages of development.  He is a  co-founder of two sustainably focused manufacturing companies.

Summary:
The next generation of construction equipment is here. Cooper Gray Robotics has made a breakthrough with our Remote Operated Electric Bucket Loader (ROEBL). Think: a small tractor, or a Bobcat as most people know it by, completely driverless and controllable from anywhere in the world.
See Campaign: https://www.fundable.com/cooper-gray-robotics
Contact Information:
Paul Cooper
Justin Gray
Issac Cronin