FIX Binding Co. is a snowboard binding brand that produces high-quality products at an affordable price.  We’re changing the industry in more ways than one – not just with bindings that are stronger, better aesthetically, and more durable than ever before, but also with incredible board-to-board versatility.  Sales of nearly $200,000 in less than one year in market are proof positive. 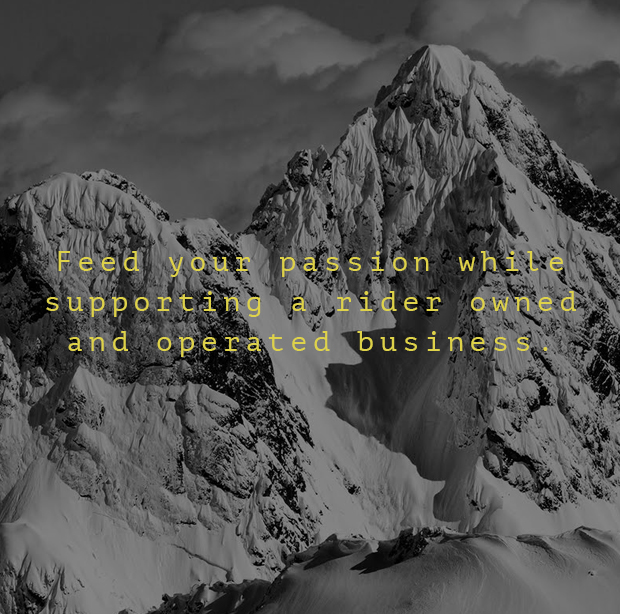 Many of people haven’t had the chance to experience snowboarding; but those who have are sucked in for life.  The snowboarder niche is one that’s incredibly committed to their craft – often spending thousands per season for the best equipment and making sacrifices in their lives in order to feed their passion.  But, unfortunately enough, the companies moving the needle on the business end of things aren’t living up to their bargain. 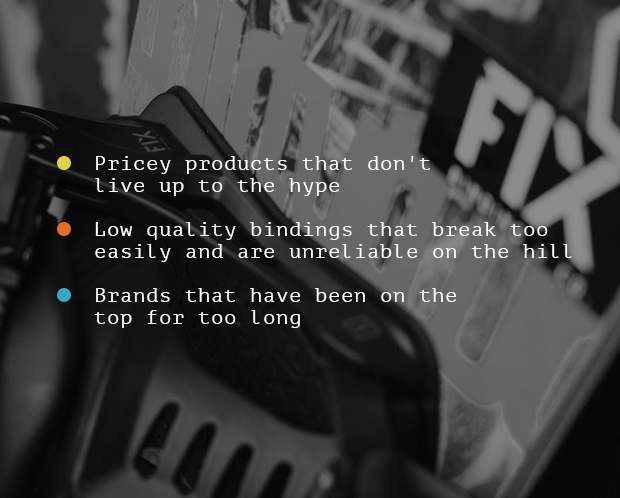 An epic day on the hill can’t get started without reliable bindings that connect you to your board.  Enter FIX Bindings – designed to be stronger, more durable, and more affordable than any other option on the market.

Our bindings look great, feel great, and have a beautifully simple and functional design.  What’s even better, they can be quickly switched out on the fly with little effort and no need for tools – even if you’re at the top of the hill.

What truly keeps us out in front is our independent appeal.  There’s recently been a mini-revolution of sorts in the world of snowboard equipment as independent board makers are surging in popularity.  These smaller brands appeal greater to the core snowboarded segment we’re targeting, due to the fact that they’re rider-owned and speak to everythign that snowboarding stands for.  This influx of indies has led to a market for an independent binding producer that is compatible with them all.

We’re proud to offer a number of other features: 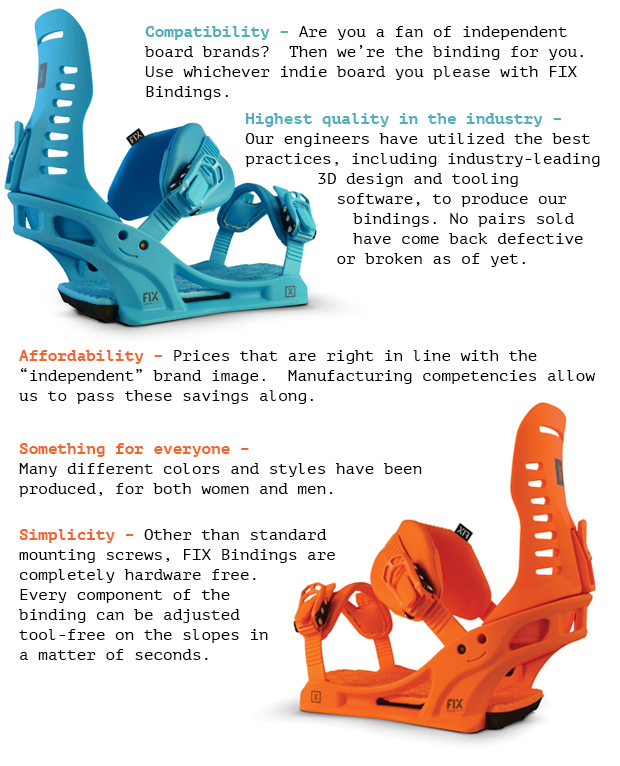 What started with a frustrating failed snowboard run – using a competitor’s binding – eventually blossomed into prototype testing for FIX in the winter of 2013.  We’ve exhibited consistent growth since then, incorporating the business, attending tradeshows, and securing funding and our first sales.  So what else has us so excited about our future? 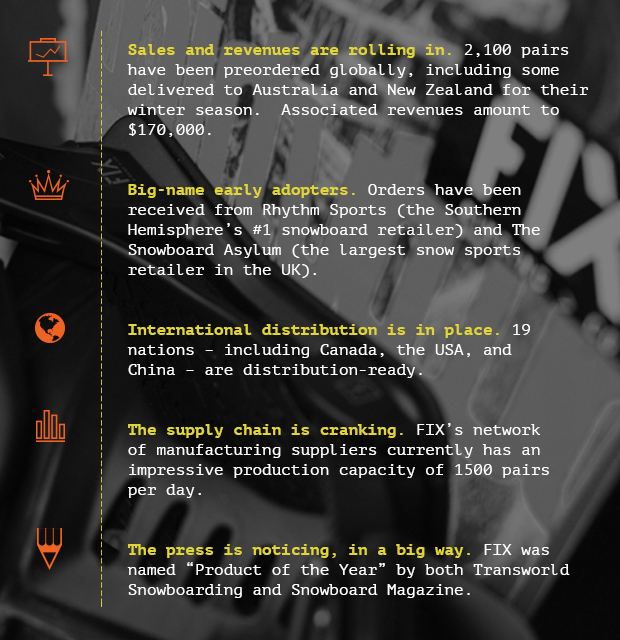 On a sunny British Columbia day in late 2013, snowboarder Jason Broz stepped out of a snowcat high above Baldface Lodge, seconds away from his first run of the day and amped with excitement.  After bending down to strap into his board, he heard a loud “SNAP!” and looked down at the horror of a broken ankle strap (coming from a brand that shall remain nameless).  With no spare parts available, Jason was forced to deal with the reality of a trip back to the lodge alone in the snow cat while his friends had the run of their lives.  It was that exact moment that the idea for FIX Bindings was conceived.

Fast-forward almost 2 years later and Jason’s assembled a company that offers the strongest and most durable bindings on the market.  Here’s a little more about FIX’s executive leadership and what they bring to the table:

Our boss is a snowboarding lifer with over 22 years of ski/snowboard manufacturing experience.  After operating Clyde & Logic Snowboards from 2000 to 2010, Jason was hired as Product Designer and Head of R&D for Endeavor Snowboards.  His notable achievements include receiving the prestigious ISPO Product Innovation Gold Award in Munich, Germany.  As FIX’s President, Jason will head up product design, marketing, global sales, team management, and day-to-day operations.

A seasoned entrepreneur, Mr. Butcher has over two decades of hands-on experience starting businesses.  In a key position with Kickstart Ventures, he helped build startups in numerous industries across 4 continents.  As the financial and mentoring muscle, he’ll look to do the same for FIX.  He’ll be directly responsible for branding strategy, financial management, and long-term business development.

Summary:
FIX Binding Co. is a snowboard binding brand that produces high-quality products at an affordable price. We’re changing the industry in more ways than one – not just with bindings that are stronger, better aesthetically, and more durable than ever before, but also with incredible board-to-board versatility
See Campaign: https://www.fundable.com/fix-binding-co
Contact Information:
Jason Broz
Jason Butcher