Gearing Up For February 2016 Release Of Scrimshaw: An Epic Post-Apocalypse, High-Seas Adventure Comic 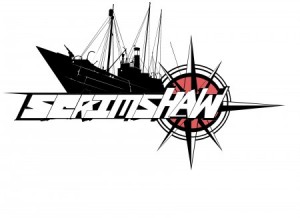 Gearing up for February 2016 Release of Scrimshaw: An Epic Post-Apocalypse, High-Seas Adventure Comic

A sci-fi, swordplay, comic featuring a Euro-Japanese Samurai, his mutant valet, and the rest of the crew of the Runaway Horse.

Las Vegas, NV October 23, 2015 – Scrimshaw is a new comic series that tells the story of a future world that has been affected by global warming, genetic and agricultural manipulation, and an all-out war between the superpowers of the world. This genre-mixing tale follows Hans and his crew as they make their way through the New Pacific. The crew members come form every corner of the world and each has their own colorful past. They have to come together as a family to find their way and face an uncertain future. Scrimshaw imagines a world abided by steel, marked by mutation, and at the mercy of the violent sea.

“Even though this is a fantasy comic, I didn’t shy away from exploring serious topics that are real problems in the world today. Issues like global warming, overfishing of the oceans, corporate exploitation, political overreach, and race relations are tackled head-on. Given the current state of affairs in the world, Scrimshaw’s imagined future doesn’t seem so far-fetched” explains Eric Borden, writer of Scrimshaw.

Scrimshaw was created by award-winning writer, Eric Borden. Borden is a screenwriter that has authored many shorts (Last Ride of The Carver, Twelve Full Moons) , a few features (Fever), a couple of comics (Dead West, Blood Game), and one book. The comic is illustrated by Dave Mims who has a background in graphic design and works in a range of areas including comics (The Infected, All Hallow’s Eve) and videogame art. Joining the team as story consultants are Mark Quist and Rashad Tabeb.

To raise funds for production, the creative team behind Scrimshaw is launching a Kickstarter Campaign. The 40 page (25 story pages plus a 15 page Captain’s Log) full-color comic book will be available for pre-order from October 23, 2015 through November 23, 2015.