Genius Georgia teens sick of batteries, make cable to charge one phone off another phone. 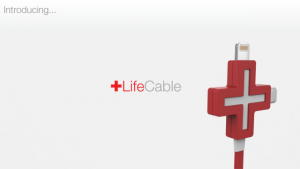 LifeCable allows any smartphone (Android or iPhone) to charge off another phone. Ditch your bulky battery and top up with LifeCable!

LifeCable is a genius new way to ensure your phone never runs out of that sweet, sweet battery juice. Instead of carrying a clunky external battery, one that’s often bigger, fatter and heavier than your phone, why not just charge your phone off someone else’s?

The cable is the brainchild of of high school students Daniel Kuntz and Adlar Tuten, age 17 and 16, respectfully. Their campaign is backed by a collection of cinematographers, electrical engineers and rendering artists.

The product is approved by Apple and will begin shipment in April.

LifeCable will also donate 15% of its profits from the campaign to the American Red Cross because game recognise game.

This just made too much sense not to make. I can’t believe someone else hadn’t come up with this already. When I saw that gap I knew I had to make it.

This is my first crowdfunding campaign and I’m really proud. I think we made something really cool and useful that anyone can afford to own.

It would be inspiring to see people all over the world enjoying my product as much as I do.

Summary:
LifeCable allows any smartphone (Android or iPhone) to charge off another phone. Ditch your bulky battery and top up with LifeCable!
See Campaign: https://www.indiegogo.com/projects/lifecable-the-any-device-power-sharing-cable/x/9035254#/
Contact Information:
Daniel Kuntz, dkuntz0@gmail.com