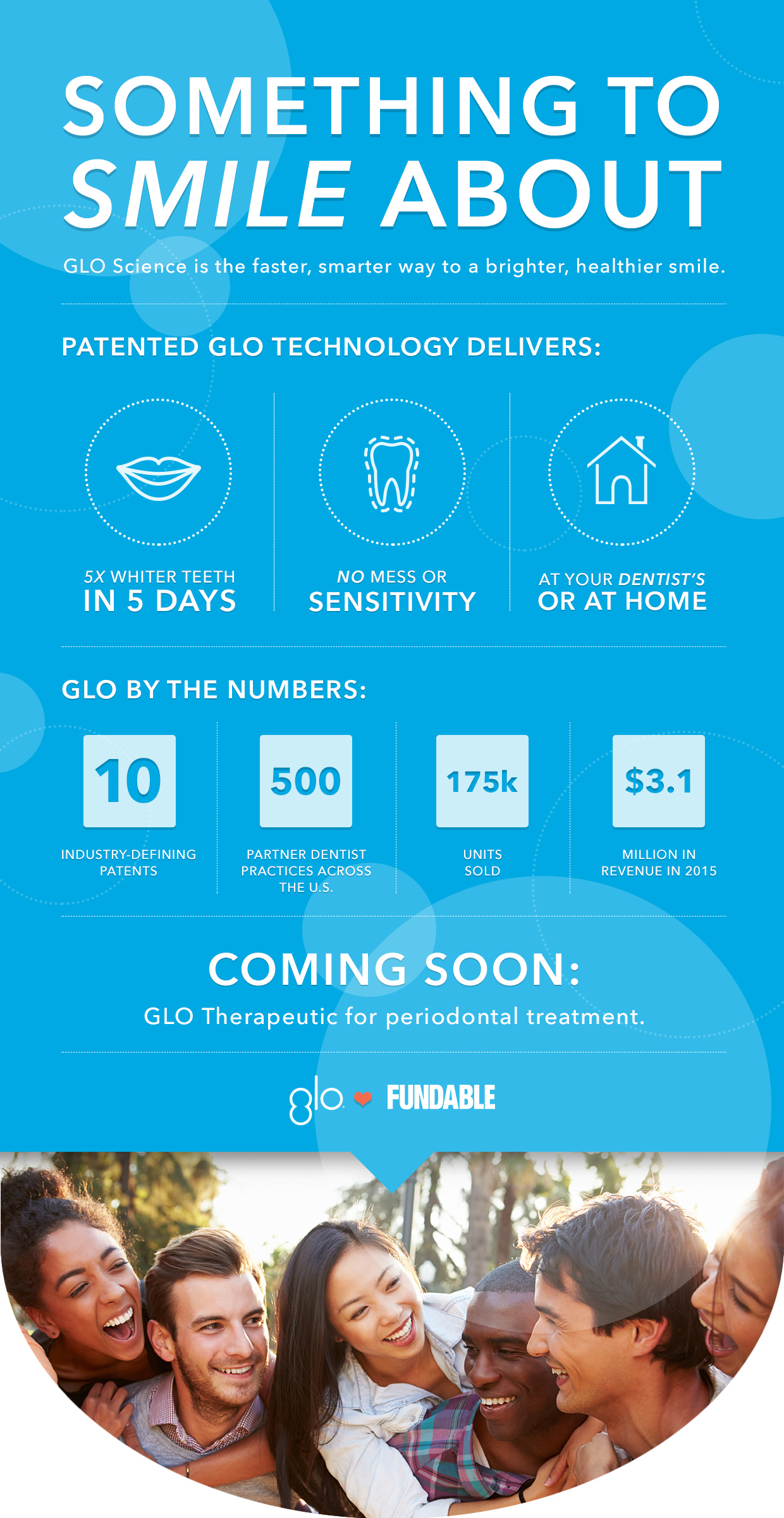 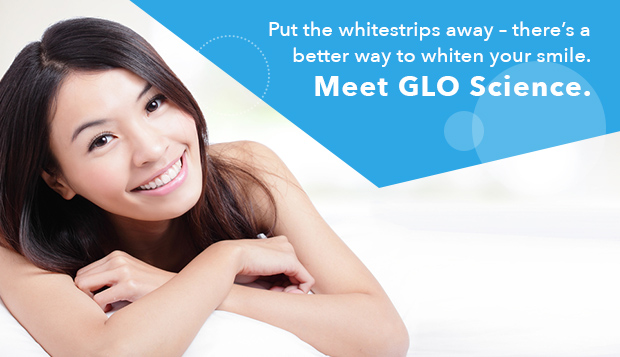 GLO Science is an oral care technology innovator dedicated changing the way consumers and dental professionals alike think about the health and beauty of their smiles. Our revolutionary, proprietary G.L.O. technology gets teeth up to 5 times whiter in as few as 5 days – all without the mess and discomfort common with other whitening solutions on the market today.

With more than 500 practices across the United States already offering GLO Science products to their patients and $3.1 million in revenue in 2015 alone, GLO has made our name in the whitening market. Now we’re ready to expand our vision and apply the same innovative approach to therapeutic applications, and launch a new era of healthy, happy smiles across the United States and internationally.

Everyone wants a whiter, healthier smile – it’s why teeth whitening is a $3 billion industry in the US alone.

But technology in the whitening industry leaves a lot to be desired: standard professional whitening methods are based on technologies that haven’t seen a meaningful upgrade in decades, while the most recent innovation in the home whitening space was the introduction of the Crest Whitestrip – over a decade ago.

In other words: people want whiter teeth, but look at the price they are paying to get them: suffering through long, expensive, uncomfortable ordeals – all for results that are middling at best, and actually can damage teeth and the surrounding tissue. And can whitening is just the tip of the iceberg – we’ll get to the problems with current therapeutic treatment options in a bit.

At GLO Science, we believe that dentists and their patients alike deserve better when it comes to their smile care options.

At the heart of GLO’s innovation is our patented Guided Light Optic (or G.L.O.) technology, which uses a combination of measured heat and light to zap the stains off teeth. The measured heat and light are delivered in what’s called a “closed system” mouthpiece which keeps the whitening oxygens from escaping the tooth surface. G.L.O. is paired with our innovative whitening gel G-Vials, which contain a minty fresh, stay-put formula that adheres to teeth while protecting gums and other sensitive soft tissues in the mouth from exposure.

The result: a faster, more efficient, more effective whitening process — without the sensitivity and discomfort so common with other methods. 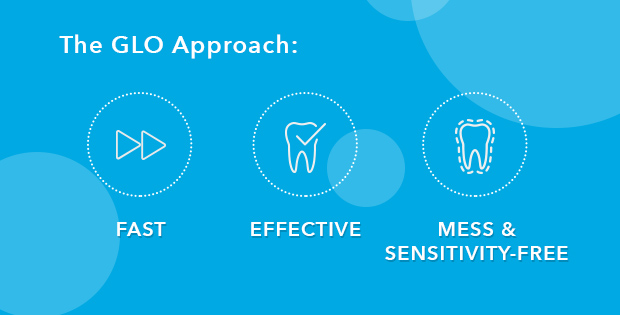 GLO Science takes a truly comprehensive approach to smile care offering products for both professional dentist office and at home use.

The GLO Brilliant Personal Teeth Whitening device features the same G.L.O. technology as in the professional line, delivered at a lower doses to give you the same professional teeth whitening results from the comfort and convenience of your own home.

The GLO Brilliant Personal Teeth Whitening line isn’t GLO’s only product for home use: we offer a whole line of products geared toward making it easy and affordable to get and keep the brilliant pearly whites you’re after. Our other products include: 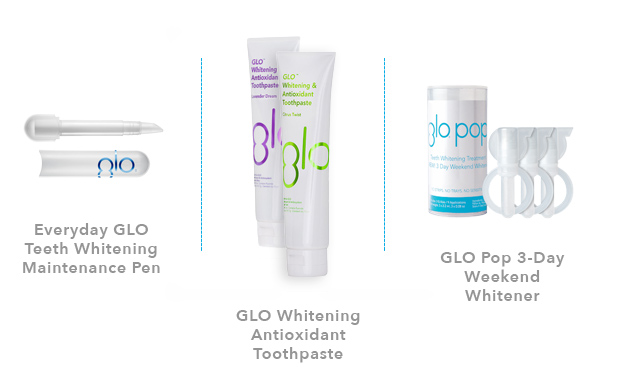 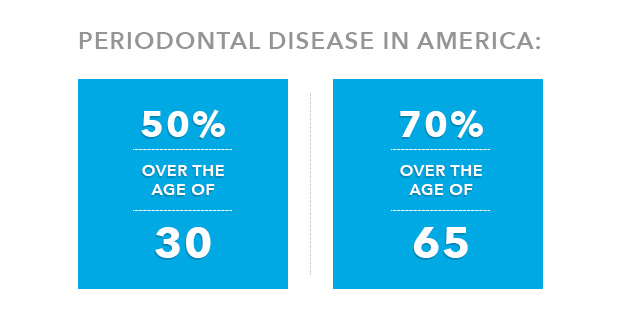 At GLO, we started to wonder: would it be possible to take the same approach that helped us revolutionize teeth whitening and put it to work to reimagine therapeutic treatment as well?

Our goal is to finalize clinical testing for our therapeutic solution in 2016. From there, we’ll start the process of introducing the technology to dental practices across the country, further solidifying our position as the leader in innovative technologies for the oral care industry.

Our dental professional customers agree: GLO Science is a game-changer in the world of smile care. 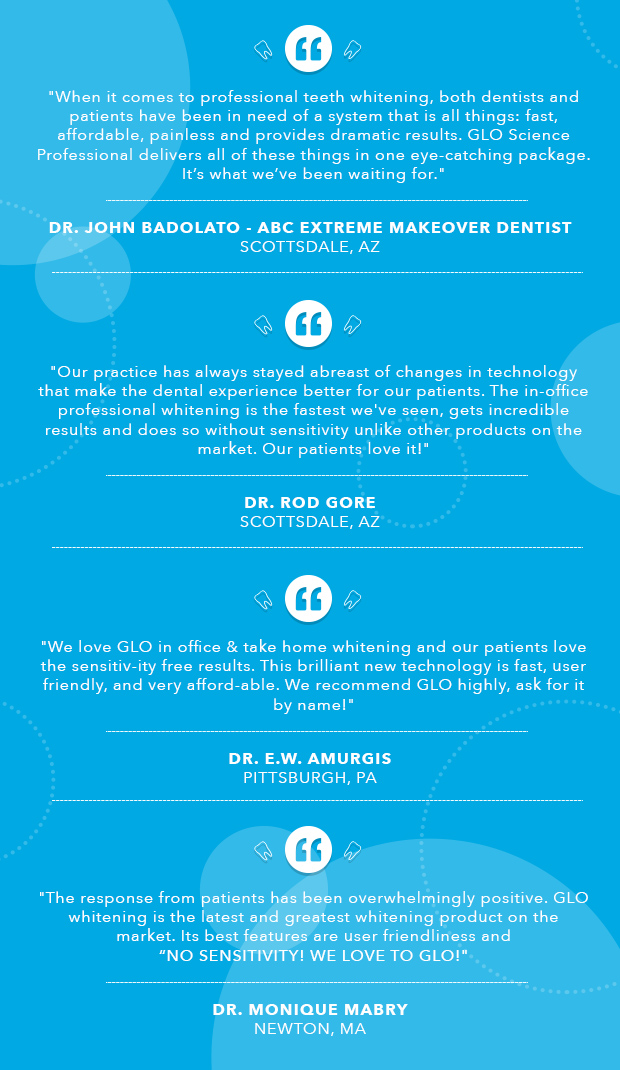 We’ve made tremendous progress since introducing GLO to the market in 2011. 2015 was our biggest and best year yet, and with further expansion in the professional dentistry market and the introduction of our new therapeutic product on the horizon, it only gets bigger and better from here.

Here are a few of the highlights of what we’ve achieved so far:

More than 500 dental practices are already offering GLO Science products to their patients. With sales efforts set to ramp up in  2016 by more than tripling the size of the direct sales force that number is on track to hit the thousands over the coming months. Beyond the professional dental channel GLO is a multi-channel proposition with a strong business also in e-commerce and prestige beauty retail.

GLO Science’s technology is protected by 10 patents, with an additional 16 patents pending.

Leading players from the personal care and the dental professional industries are already recognizing GLO’s revolutionary potential. We have established partnerships with Sephora, QVC and also Benco, a leading nationwide distributor in the dental professional channel. Furthermore, we just entered into a Global joint technology development partnership with one of the globally leading consumer products companies. All of which we believe is setting us up for accelerated growth in the very near future. 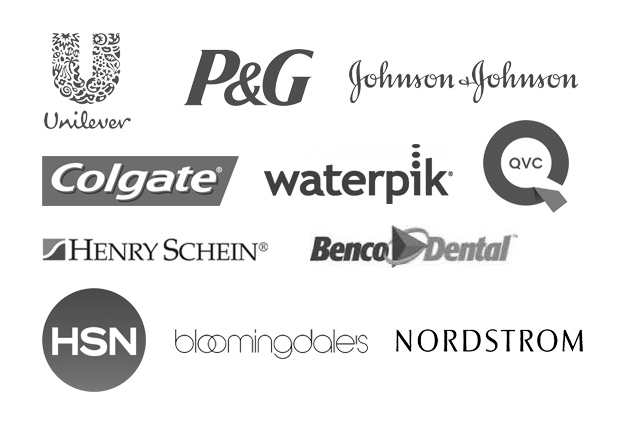 GLO Science has won 3 Thomas Edison Awards for innovation in the personal care space: in 2012, we won Silver for our GLO Brilliant Personal Teeth Whitening Device, and in 2013 we won two Gold awards for our Everyday GLO Teeth Whitening Maintenance Pen and GLO Solo products.

Up next for Glo: finalizing clinical trials on our new therapeutic product and getting GLO whitening and therapeutic solutions into more dental practices across the United States, while also strongly expanding our e-commerce business. Furthermore, we are preparing for the international expansion of GLO targeted no later than 2017 – with initial focus on Latin America (Brazil) and Europe (UK, Germany).

For more information about the future of GLO Science and how you can help make it happen, request access to the Business Plan tab of this profile and let’s talk! 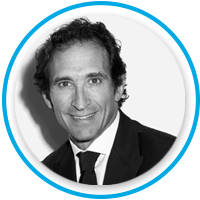 Having spent over 15 years in the beauty retail industry, Stacey Levine brings comprehensive experience,unrivaled dedication and a unique vision to the GLO Science team as Co-Founder and Chief Marketing Officer. Stacey holds a Bachelor of Science from Boston University School of Management. Stacey sits on the board of Foundation Rwanda and co-founded the GLO Good Foundation, alongside Dr.Levine, which aims to provide oral health care to underserved populations across the globe.

Rick brings over 20 years of experience in finance, accounting and operations management to the GLO Science team. Rick started his career as a CPA for Price Waterhouse before spending 10 years with Hallmark Cards, Inc. in various financial and operational roles. He then transitioned to supporting several venture and private equitybacked companies the last 7 years as CFO and COO. His fatheris a dentist and he grew up in the dental office. He also was the CFO of the Natural Dentist, Inc. which he guided through an exit.

Betsy’s experience spans across over 15 years of executive leadership experience in expert and prestige beauty care with the L’Oreal company, last as the VP Marketing for L’Oreal Paris Skincare North America. Betsy built an excellent track record in leading brand businesses like Vichy and La Roche-Posay across the professional / expert and the consumer channels,having commercial leadership across marketing and sales as well as developing potent strategies with excellent go-to-market executions.

Summary:
GLO Science is an oral care technology innovator dedicated changing the way consumers and dental professionals alike think about the health and beauty of their smiles. Our revolutionary, proprietary G.L.O. technology gets teeth up to 5 times whiter in as few as 5 days – all without the mess and discomfort common with other whitening solutions on the market today.
See Campaign: https://www.fundable.com/glo-science
Contact Information:
Thomas Pinnau