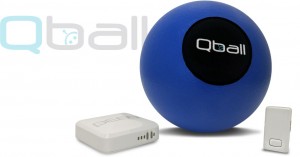 SALT LAKE CITY, Oct. 14, 2015 — Peeq, the maker of Qball, a foam rubber ball with a built-in wireless microphone, is ready to give back to communities across the US. Having already exceeded its goal of $30,000 on their Indiegogo campaign, Peeq wants to help low income schools due to an outpouring of support and interest in the product from teachers. Peeq founders see a need to get Qballs into more classrooms across the country. Some of the comments from educators on the Qball:

“This is an amazing idea. It gets kids involved in what is going on in the classroom. Makes learning fun and exciting. I can see this used in all educational arenas from pre-k to colleges.“

“What a fun way to encourage speaking and listening!“

The Peeq team is already set to donate to low income schools through various rewards, but decided it wants to do more. The team has added a new option to campaign backers: they can now gift a Qball to a classroom or teacher of their choice. “The Perfect Gift” reward will include a Qball (mic included), receiver, and bluetooth speaker, all of which can turn an ordinary classroom into a more interactive experience. Donors will have the option to include a personalized card or to remain anonymous.
The Qball package includes:

Qball has also set a new funding goal that will trigger a donation of 10 Qballs to low-income schools. The team is hopeful that this new goal will help get the Qball into the classrooms of those who need it most.

The campaign can also be found: https://www.indiegogo.com/projects/qball-microphone-you-can-throw-drop-or-roll/x/12001181#/

Summary:
The maker of Qball, a wireless mic embedded in a ball, is seeking to help underfunded schools. The revolutionary system has been proven to increase student engagement and is sought out by educators. Goals have been set to bring Qballs to the communities and schools that need them.