Mobile: The Crowdfunding Monitoring Tool of the Future 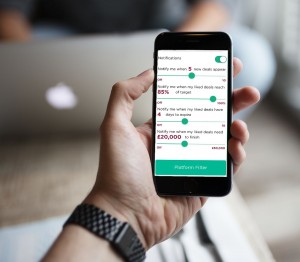 LONDON – There’s a new tool on the market for crowdfunding professionals, from investors to stakeholders, to monitor campaigns and know what is going on before the competition. It’s a mobile app aggregator called OFF3R.

“We’re the world’s first and largest mobile aggregator for the crowdfunding space,” says Lex Deak, OFF3R founder and CEO. “We’ve got lots of plans for the future and have world class actors and partners to help get us there.”

One of those plans involves a Crowdfunding Academy, which Deak says will roll out its first pieces of content in January 2016. The educational content will be incorporated into OFF3R’s web-based systems as well as the mobile app and be focused on teaching investors the importance of risk management, transaction security, and other details of investing in equity crowdfunding.

The goal is to make crowdfunding available to all investors around the world and give them all access to all the available platforms through one tool.

The Limitations of Mobile are Also Its Strengths

Mobile has become the agile tool of the early 21st century. For that reason, Deak believes it has the potential to disrupt and revolutionize the way financial transactions are made.

“I think it’s a great channel for discovery and monitoring,” he says, “but you can’t understand the business entirely through mobile.”

At least, not right now.

“You can get a feel for the business through mobile,” Deak says. “But before you make a decision to employ cash, you want to look at balance sheets and financial statements.” He recommends that investors revert to desktop systems for serious document review and due diligence for most transactions.

Nevertheless, if you want to monitor the crowdfunding platforms through which you intend to invest, and you want to track the deals that have caught your interest, mobile aggregation is the wave of the future. Deak is excited to have rolled out the first such tool. 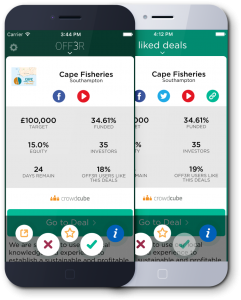 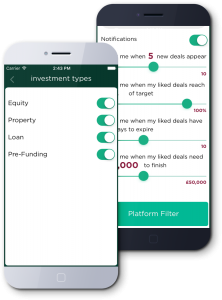 If you trade in securities and traditional financial instruments, then you likely already have mobile aggregation tools at your disposal. Deak believes crowdfunding and alternative finance investors should have them too. That’s why he created OFF3R.

“All of us are getting busier and busier,” he says. “Our inboxes are getting overloaded. You need a dedicated tool to stay on top of real opportunities.”

With the proper tools, any investor interested in crowdfunding opportunities can be informed of the best deals and platforms, act more quickly on the best opportunities, and react to potential losses more effectively, Deak says.

In addition to OFF3R, he says investors should manage contacts and conversations through a CRM system, communicate with collaborators through a secure cloud-based platform, bookmark relevant content in their browser tabs, and track listings and markets through macro tools. But to monitor the opportunities, he says, OFF3R is the best tool on the market today and will be tomorrow. It’s a lot better than relying on existing tools like peer advice, angel syndicates, and syndicators. With OFF3R, you can have it all in the palm of your hand.

Summary:
There’s a new tool on the market for crowdfunding professionals, from investors to stakeholders, to monitor campaigns and know what is going on before the competition. It’s a mobile app aggregator called OFF3R. The goal is to make crowdfunding available to all investors around the world and give them all access to all the available platforms through one tool.
See Campaign: http://off3r.com/
Contact Information:
Lex Deak – Founder/CEO
lex@off3r.com
www.off3r.com
+44 (0)7970 131173
http://off3r.com/press/