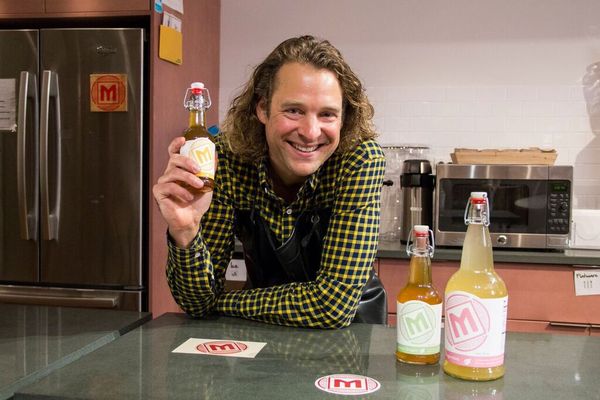 Food and drink were always special things in our family. My mother was the real hippy healer alchemist, always baking fresh bread and whipping up tasty exotic treats, never afraid to try something new. I always wanted to get involved in whatever action what going on in the kitchen, the nerve center of our household.

This passion for food never left me. I took jobs in kitchens and food factories throughout my college years in Massachusetts. Having worked in both restaurant and commercial kitchens, I built a firm foundation for my own invention and foray into the food industry.

At some point in my late teens, my mom became obsessed with a fermented tea called “Kombucha.” She was compelled by the story of her nurse colleague’s daughter, a young girl afflicted with a terminal liver ailment, whose symptoms had stabilized after drinking this home-brewed tea every day. To my mother, it was imperative she learn to brew for her own children and it wasn’t long before she began forcing it on us every morning at breakfast.

About ten years after we’d started drinking this stuff daily, I realized I hadn’t fallen ill during that entire decade. It was a startling apotheosis and became the catalyst for my interest in brewing Kombucha on my own.

November of 2009 rolled around and a friend was organizing a kind of “hipster bake sale” in the basement of a local church called the “Greenpoint Food Market.” She’d asked if I had anything I’d like to sell and immediately I thought it might be fun to bottle the brew I was making from mom’s Kombucha recipe. “Mom’s Kombucha” blended into one word and so on that fateful chilly day in the funky basement of a church, “MOMBUCHA” was born.

After five years of doing this as a hobby and the last two developing the product as a grocery item, I’ve arrived by good fortune to this point. This loan will finally push me over the start-up hump and into the real beverage world. I’m extremely humbled and excited by this opportunity and very grateful for your support.

What is Kombucha?
It’s an ancient elixir imbibed for medicinal purposes. Kombucha can be been found all over the world with record of it stretching back millennia. Sometimes known as the “Manchurian Mushroom” or “The Tea of Everlasting Life,” Kombucha is bubbly, crisp, balanced tart and sweet tasting fermented tea, naturally fortified with vitamins and beneficial acids.

How is it made?
Kombucha is made by feeding sucrose to a living colony of yeast and bacteria in tea. Essentially, we make a big batch of sugary/mapley tea, part it out into three-quart glass fermenters, add a little piece of Kombucha culture and a cup of previously brewed Kombucha, cover it with a piece of muslin cloth and set it for a week in a temperature and humidity controlled room. After that, it gets filtered and bottled in clear glass swing-top bottles and left to cure for another week with the cap fastened. Bottle conditioning allows the residual sugars to be metabolized by the Kombucha culture and for natural carbonation to occur. Mombucha uses American organic evaporated cane juice or pure Grade B New York State maple syrup. Our teas, herbs, roots and spices are sourced as locally, sustainably and organically as possible. We do not flavor or carbonate our Kombucha after fermentation. The flavor of Mombucha is derived solely from the initial steeping of whatever it is we steep and the magic that happens during fermentation. The end result, as you will find, is something special.

How is Mombucha different from other Kombuchas?
This is tricky because the Kombucha industry has grown exponentially with lots of closely guarded trade secrets. We at Mombucha are happy to share our technique with anyone interested in learning. If you visit our brewery in Greenpoint, we’ll give you a starter kit! Education and home brewing are essential to the ethos of our brand. The best way to answer this question is to taste the difference for yourself. We can confidently say that you have never tried anything like it. We hope to share some with you soon!

There are a few key pieces of equipment I’ve been unable to save the capital to purchase outright. Depending on the size of the loan, I would like to acquire them all through PCI Auctions to ensure the best possible price.

1.) Commercial Undercounter Dishwasher $3-6K – Bottle washing and sanitation is an extremely important but time consuming step along the production line without automation. An under-counter, heavy duty dishwasher would allow for the sanitation of over 1 full case of 10oz bottles in seconds as opposed to hours by hand. The energy costs are nominal and the time it would afford me and my staff to attend to other business improvement activities would be the most valuable return on investment.

2.) Benchtop Time Gravity Filler $10-15K – Bottle filling is the other bit of automation in a beverage operation that separates the hobbyists from the pros. Even the most basic form of filling using these bench top machines could help us satisfy big orders in a week that would otherwise take a month.

The addition of these machines to the Mombucha workspace would take our business to the next level of competition, exponentially increasing our yield and affording us more time to spend working on the important task of marketing the product as well as spending quality time with our families.

Summary:
What is Kombucha?
It’s an ancient elixir imbibed for medicinal purposes. Kombucha can be been found all over the world with record of it stretching back millennia. Sometimes known as the “Manchurian Mushroom” or “The Tea of Everlasting Life,” Kombucha is bubbly, crisp, balanced tart and sweet tasting fermented tea, naturally fortified with vitamins and beneficial acids.
See Campaign: https://zip.kiva.org/loans/17154
Contact Information:
Rich