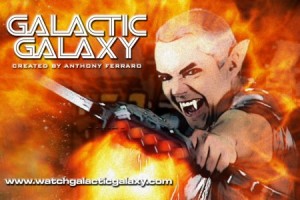 Thousands and thousands of projects post to crowdfunding sites every single day, but only every now and then does something so distinctive pop up that it’s undeniable. Galactic Galaxy appears to be one such project. It’s is an irreverent Sci-Fi web series in the style of Heavy Metal and Kung Fury by creator Anthony Ferraro, and within its first 48 hours Galactic Galaxy had already raised nearly one-third of its $30,000 goal on the crowdfunding site IndieGogo.

What is particularly distinctive about Galactic Galaxy is the graphic novel look and treatment of it’s video production. This distinctive visual style evokes the comics of the 70s and early 80s, and appear to be helping it rise above the competition in the same way that Kung Fury did when it raised over $630,000 in just four weeks over a year and a half ago. Will Galactic Galaxy follow in Kung Fury’s footsteps? Only time will tell, but if Ferraro is able to maintain the momentum from their first 48 hours, it could be a close second.

The series takes inspiration from Joseph Campbell’s Monomyth, the 1970s Heavy Metal Magazine, and Marvel cartoons from the 1960s. The entire series is shot on green screen. The visually striking images in Galactic Galaxy were created by combining live-action performance with striking and distinctive 2D and 3D animation. “I’m bringing to life an epic space odyssey in a way that is both visually stunning and economically feasible.” explains series creator, Anthony Ferraro.

Anthony Ferraro, Creator/Director of Galactic Galaxy came up with the concept about a year ago. He went to college in Manhattan for acting and earned a Masters in Directing from RADA/King’s College in London. He started his career in theater then moved on to making music videos, most notably Ben Folds 5, Bracket, and The Del Rubio Triplets. In the 2000s, Anthony wrote and directed two Mumblecore features, a few shorts, and was producer/editor for Al Gore’s Current TV.

For the past year Anthony has been working with artists, building costumes and sets, casting, workshopping, and shooting test scenes for the series. In order to raise funds to produce the first six episodes of Galactic Galaxy, Anthony has launched an Indiegogo campaign. Some of the perks available for pre-order include, a limited edition signed and numbered Galactic Galaxy art print by concept artist Farron Loathing, Associate or Executive Producer credit, and a digital copy of a proof of concept short of the Galactic Galaxy series.