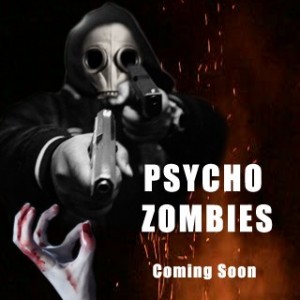 Newark, NJ, October 19, 2015 – This project is currently in pre-production and is available for crowdfunding support on kickstarter.

A group of misfit students battle outrageous zombies at their trendy high school on the eve of the biggest homecoming party. During the fight
of their lives they discover a cure for the zombie virus that’s un-imaginable and right under their noses.

These zombies are not your average run of the mill zombies, they take on the characteristics of the victims they eat. Mixed with some
psychedelic powers these zombies give you a run for your money, its “Idle Hands” meets “Dawn of The Dead”.

Psycho Zombies, a feature length film written by Mike Dixon and Kheela Geddes. The funding goal is to raise $200,000 for seed money to acquire
larger funding from film investment firms. The second and final phase of funding require 2 Million dollars to complete the film in all its
glory for it’s release fall 2016.

Music from different continents have been submitted for the soundtrack making this project a global collaborative effort. Tony Ramirez a
special effects wizard has just signed on to the project. He recently worked on special FX crews contributing to films such as 2014’s The Maze
Runner and Captain America 2: The Winter Soldier.

“This is going to be one of the most diverse horror films you have ever seen, different people do different things when they are sacred. This
makes for good drama.” says writer director Mike Dixon. Psycho Zombies is a Action, Comedy, Horror type of film complete with original
characters and story line (no Hollywood remakes here). With an experienced writing and production team, the production company is confident in achieving its goals and overcoming any challenges from concept, creation to distribution.

Crowdfunding Rewards
Some of the rewards include Signed copy of the script by the writers and director.A psycho zombie signature T-shirt.
Movie poster, credits and VOD free streaming of the completed film. A walk-on role or extra in the film plus
VIP premiere Red Carpet tickets.