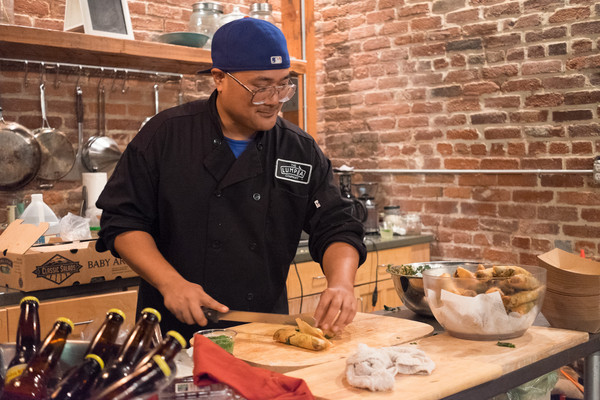 Alex grew up as the youngest of 5 boys in the Bay Area of immigrant parents
from the Philippines. He had a loving family and his first passions were
sports, baseball cards, R&B music, but most of all, his mother’s cooking,
especially her lumpia.

Lumpia is a deep-fried handcrafted crispy pastry that is traditionally
filled with vegetables, meats, and spices. It’s the most enjoyable Filipino
appetizers that’s universally loved by people from all walks of life.

Alex’s mom started the first ever lumpia booth at Alex’s annual school
carnival in Hayward, California in the 1980s. The lumpia booth was wildly
popular with Filipinos and non-Filipinos alike because it was the only
place where you could buy Filipino food all year. Alex gained popularity
as the lumpia kid because he would sneak under the table and grab you free
lumpias if he liked you so you could bypass the hour long line. Through
the power of lumpias, a broad community gained a whole new appreciation of Filipino culture and Alex learned how community could be built through
lumpias made with TLC.

After attending San Jose State University with a degree in marketing and
spending several years as a producer in the music & entertainment industry,
Alex re-ignited his passion for crafting lumpia and sharing his lumpia with
the world.

In 2015, Alex teamed up with two of his old college roommates and started
“The Lumpia Company” Alex prepares his handcrafted lumpias at Kitchener
Oakland, an incubator kitchen in Oakland, CA, and after many months in the
kitchen, Alex developed several fusion flavors of lumpia that he’s really
excited about. Their most delicious and popular flavors include:

Like his mother, Alex began selling his lumpia at food festivals and
pop-ups all around the Bay Area. His lumpia was received with great
fanfare and excitement as people had never had lumpia quite like Alex’s
before.

Shortly before the holidays began, Alex began to flash-freeze his signature
handcrafted lumpias for online distribution, growing his audience and his
sales.

With the help of Kiva lenders, Alex can jumpstart The Lumpia Company
operations so that he can share his passion for lumpia to all the eaters
around the world.

This past year was a true learning experience as I started a brand new food
production business that generated an instant buzz on the internet. I had
to figure out how to produce at a higher quantity and more efficiently
without losing the quality artisan touch of our handcrafted, hand-rolled
lumpias.

This loan will allow me to purchase a commercial deep fryer, vendor tent,
expand business operations, increase online sales, strengthen our production team, and bring us much closer to opening the very first “The Lumpia
Company” brick & mortar in the Bay Area.

Summary:
In 2015, Alex teamed up with two of his old college roommates and started
“The Lumpia Company” Alex prepares his handcrafted lumpias at Kitchener
Oakland, an incubator kitchen in Oakland, CA, and after many months in the
kitchen, Alex developed several fusion flavors of lumpia that he’s really
excited about.
See Campaign: https://zip.kiva.org/loans/17005
Contact Information:
Alex